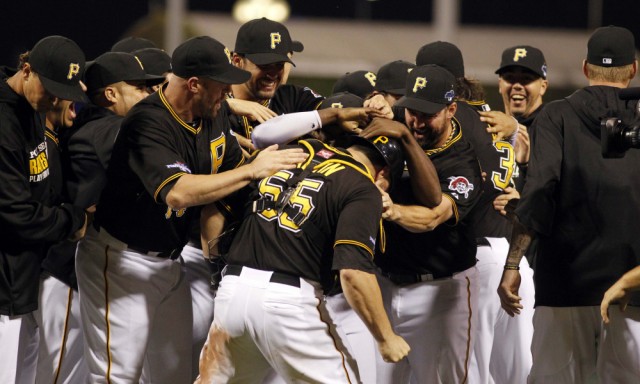 After three tough games to start the season, the Pirates battled hard on Saturday evening to earn their first victory of the season over the Razorbacks.

Cam Sokalski was locating his pitches well early and it showed.  He recorded nine strike outs over the first four innings on the bump and also chipped in with the bat himself in the bottom of the third by slapping an RBI double into the gap that scored Jordan Lorenzetto who doubled to lead off the inning.  Matthew Rhoda followed suit with a tricky infield hit which scored Sokalski to put the Pirates up 2-0 before Kyle Boyko forced three quick ground balls to get the Razorbacks out of the inning.

Sokalski cruised throughout the evening and the Pirates added another run in the fourth to make it 3-0 on a base hit by Tony Elliott which split the middle infielders and scored Ryan Manderson who was hit by a pitch earlier to lead off the inning.

The Pirates added more in the bottom of the sixth inning after Ryan Gordon got things started with a one out walk following a Warren Bayly strikeout to start the inning.  After a Joey Morberg fly out, Ryan Manderson hit the ball hard and reached on a Razorback infield error and Jeff Morberg followed by battling back out of a tough count to earn himself a walk which kept the inning alive with the bases loaded and two outs.  Tony Elliott came through in the cluch with a two out base hit up the middle scoring both Gordon and Manderson to make it 5-0 before Jeff Morberg scored on an errant play at second base.  James Bayly's continued his solid play at the plate and drove in Tony Elliott with a two out double to left field to round out the scoring at 7-0.

The Pirates are in tough to kick June off facing the defending champion Blue Jays on Friday June 1st, the Orioles on Saturday June 2nd, and the Cobras on Monday June 4th.

COMMENTS
This article has No Comments.
Be the first to add your comments!
Click the "Post a New Comment" button below.
firstname lastname commented Just Now
×
"body"


Inappropriate comments will be removed by League and Team Managers.

External links are provided for reference purposes. Pirates is not responsible for the content of external Internet sites.
Copyright Pirates All rights Reserved.
Sports League Management Software by LeagueToolbox